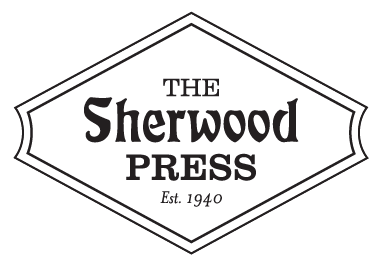 76 years and going strong. Let us print something beautiful for you! 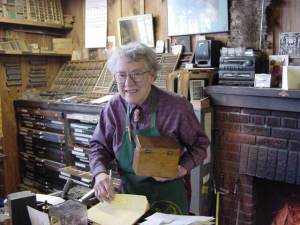 Jocelyn in front of the fire

The Sherwood Press was founded in 1940 by Jocelyn Dohm. Jocelyn had just graduated from the University of  Washington in Seattle with a bachelor’s degree in English Literature, and with a friend, Betty Fultz, decided to open a print shop in the basement of her family home in Olympia, Washington.

During the summer after graduation, Jocelyn and Betty acquired a small Old Style Gordon platen press, some type, and other print-shop fundamentals in Seattle. Jocelyn’s father, Edward Dohm, approved of their ambitions and proposed that he and Jocelyn build a small print shop on the uphill side of their lakeside property. That summer and fall, Jocelyn and her father built the 400 square foot building together after a design by Jocelyn’s sister, Virgie. The only part of the building they didn’t build themselves was the brick fireplace. The press building was finished in that fall.

Jocelyn and Betty were not full-time letterpress printers. At first they ran occasional jobs while holding other jobs in town. After a couple of years, Betty got married and moved north. Jocelyn continued alone and business picked up when jocelyn quit her job at a local title company.

Jocelyn built the business little by little until she was turning out a large amount of work for a one-person business. She kept every single thing she printed in an archive that she meticulously maintained in dated boxes in the press loft. She would write the date, number printed, and indicate whether she had used lay guages on each sample. This is just one example of Jocelyn’s prodigious record-keeping.

Over the years, Jocelyn established the press– and herself– as a beloved Olympia institution. She printed business stationery, wedding invitations, paper napkins, business forms, baby announcements, concert programs, memorial cards, and an amazing array of other small jobs, from coasters to matchbook covers to record sleeves for Olympia’s indie-rock music scene, all using metal foundry type set meticulously by hand and run on one of her letterpresses. A retrospective given of her work in 2000 (her 60th year in business) revealed a surprising historical account of the history of Olympia, as seen through a sampling of its printed ephemera.

But Jocelyn was far from just a printer in a cozy cottage print shop. She was a political activist, frequent event emcee, and long-term member of the American Association of University Women, Soroptimist, League of Women Voters, and Masterworks Choral Ensemble. She was the first person to call about local and regional political candidates and ballot issues. She would even mark up her voter’s pamphlet and leave it out on a table in the press for visitors to consult, which they very often did. Jocelyn and her partner also attended more plays, concerts, public hearings, city council meetings and other events than most people can boast. She supported her favorite causes with generous and consistent contributions.

Jocelyn hosted a long list of mostly high school students who would come and work for her as “printer’s devils” after school. They would come and set type, put type away, sweep, clean and generally help around the tiny shop. And this is how I came to be involved back in 1989. I was not in high school, but just getting ready to finish school at The Evergreen State College. I met Jocelyn when some friends urged me to visit her after I calligraphed their wedding invitation which was then printed at The Sherwood Press. They thought I would love the place, and once I got around to making my visit, I found they were right.

Once I crossed the threshold at the press, I could never quite leave again. Jocelyn and I became instant friends, and our friendship deepened over the fourteen years that I volunteered at the press. After eight years of my very part-time apprenticeship, I finally told Jocelyn that I could see myself as her successor. She instantly agreed. For six more years we continued our friendship and the apprenticeship grew more serious. For the last three years of her life, Jocelyn took care to make sure that I knew how to run the Heidelberg “Windmill” 10 x 15 platen letterpress, handle the accounting, banking, source supplies and paper, and other details I would need to master to assume ownership.

Jocelyn had told me early in our acquaintance that she had no intentions of retiring from the press. So I knew that when I eventually took over, it would be because she was no longer able to operate the press, which gave me (and I imagine her, too), a powerful reluctance that such a day would ever come. And after working continuously with joy for 63 years in her beautiful print shop, nobody more than Jocelyn could have understood the loss that such a day would bring to her, to me, and to our community. But that day did come. On Monday, November 17, 2003, I came to work to find that Jocelyn’s press van was not in it’s usual spot in the driveway. Jocelyn’s long print-run had come to an end.

If you would like to hear more about  Jocelyn and my shared story, listen to the interview with me on The Story with Dick Gordon from American Public Media. This was recorded in the studio at KUOW-FM Seattle in 2008. http://www.thestory.org/stories/2009-05/jocelyns-press